Before we can start blaming motorists, electricity consumers or airline passengers for contributing to climate change, we need to recognise that a changing climate is nothing new. Change has been happening for millions of years, for a variety of natural reasons that scientists are now starting to better understand. The challenge for climate scientists is to separate natural climate change from that which is human induced (anthropocentric). 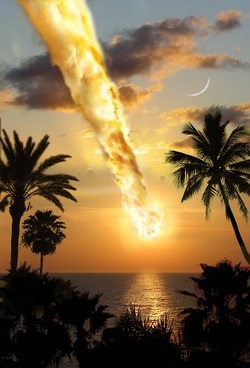 Source: sciencewise.anu.edu.au
According to Dr Andrew Glikson (Australian National University, Climate Change Institute) asteroids have had a "big impact on climate". When an asteroid hits the earth it causes the atmosphere to change. Dust and particles of debris from the collision find their way into the upper atmosphere and have the effect of blocking the sun's rays. Insolation is reduced and the climate cools because energy from the sun is reflected back into space. According to Dr Glickson, the effect is immediate and pronounced, but on a geological timescale it is a mere blip.

Probably the most famous asteroid event is the one that took place around 66 million years ago and may have been responsible for the mass extinction of the dinosaurs. A 180km wide crater off the coast of Mexico is used as evidence of that impact. Called Chicxulub, the crater was probably created by an object estimated to be 10km across.  The dust and particulate matter from that asteroid collision can still be found around the globe and is used as evidence of significant climate change that might have added to the demise of the dinosaurs.

Asteroids are like buses. You wait ages and then so many arrive in a short period of time. If this is the case, as Dr Glickson suggests, then a cluster of smaller asteroid collisions could also have had a significant impact on the Earth's climate. Astrophysicists are gathering evidence to suggest that our planet  periodically passes through areas of space that are populated by asteroids. 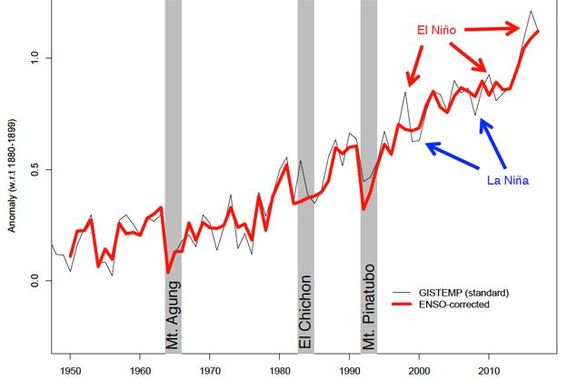 Volcanoes, such as Mt Pinatubo, have caused a drop in global temperatures for a short time. Source: NASA
Volcanoes should not be blamed for the recent, significant, increases in levels of CO2 in the atmosphere. On balance, the volcanic activity observed by earth scientists has caused modest amounts of cooling for a short period of time.

There is evidence to suggest that the Medieval Warm period had fewer volcanic events. While the Little Ice Age is associated with episodes of increased volcanic activity. 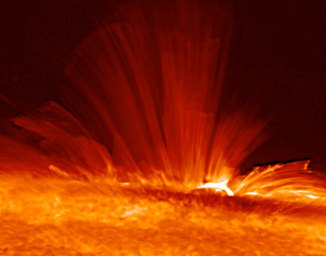 Sunspots are associated with solar magnetic activity. Photo: NASA
It is widely agreed that variations in the sun's output of radiation is linked to climate change. However, most climate scientists do not see a correlation between solar output and recent global warming.

All agree that the sun follows an 11 year cycle. Sunspots appear, only to then disappear. An increase in sunspots is associated with an increase in solar output. Researchers at the University of Washington have calculated that at the height of the 11-year solar cycle, increased solar output produces an immediate warming of the atmosphere of 0.16 °C. However, they and other leading scientists such as Nobel Laureate Professor Crutzen, at the Max Planck Institute in Germany, see no correlation between the heating and cooling produced by the solar cycle and recent global warming.

The relationship between solar variability and terrestrial climate is complex. For those who wish to investigate further, this NASA news report is a good place to start. 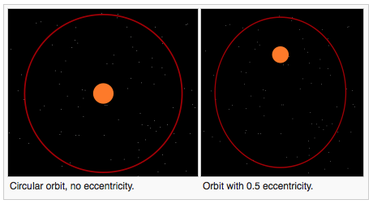 Source: Wikipedia
Serbian geophysicist Milutin Milanković was able to collect data to show that the Earth's orbit changes from being circular to elliptical over a period thought to be over 100,000 years. Orbital changes mean that the distance between the Earth and Sun varies over a very long time period, causing cyclical changes in the amount of solar radiation reaching the Earth. The Milanković cycle correlates with longterm changes in our terrestrial climate and is used to explain why ice ages have come and gone.

Although planetary wobbles can be associated with climate change over a period of time so long that only geologist can get excited - the Milanković cycle does nothing to contradict the orthodox scientific view that global warming in recent years is anthropocentric.
Finally, it is important to understand that atmospheric warming is not evenly spread. NASA scientists report that the lower layers of the atmosphere have been warming more than the upper layers. This is consistent with an enhanced greenhouse effect. Increases in solar output have the effect of warming all layers of the atmosphere, not just the lower layers.
GLOBAL WARMING - IS THERE A TECH FIX?